Why do ghosts and ghouls and fake blood define Halloween? I bet if I were to ask anyone why we celebrate Halloween, that few would really know the meaning and reason for Halloween.

I, myself, wasnt entirely sure until I had to look it up the other day.

It is linked to the Celtic festival of Samhain. Samhain is an autumn holiday which celebrates the end of the “lighter half” of the year and the beginning of the “darker half” of the year. I guess that makes it appropriate to sit on the day which the clocks go back on.

Ancient Celtics believed that at this time of year the line between our world and the otherworld becomes thin, allowing spirits to pass through. Families of those who had died gathered together to honour their spirits and invite them into their homes while harmful sprits were ward off by wearing colourful masks and costumes; disguising themselves as a harmful spirit to avoid danger.

I’m not exactly a fan of scary things: films, characters, nightmares. And so going out and seeing half the people dressed up in cut clothes covered in fake blood isn’t exactly my idea of fun.

I saw a guy last night who had made his face really pale and somehow fashioned it to look like his eyes had been taken out: really dark and covered in a thick layer of fake blood. It truly horrified me.

Why, if people are dressing up as dead people and stuff, do these dead figures have to have died in some horrifying way?! I went shopping yesterday and the shop assistants were dressed up in scary fancy dress. I just don’t think it’s very appropriate if your working around food and meant to be there as an approachable person for customer, to look like someone has just ruined your life with a machete, cut off their hands and slit their throat.

And I bet no one really knows why it is that people are dressing up like this.

I think Halloween is clearly one of main holidays which its meaning has been lost. Every holiday has just been more and more commercialised over the years. Don’t even get me started with Christmas, or Easter! The religious background has just been lost in a drought of presents, cards and chocolates.

While I think that national holidays are a good way to bring people together and enjoy a little bit of fun in the middle of a long hard year I think that we shouldn’t forget about the meaning of a holiday and it’s origins.

There is a reason why we celebrate things and I think that its problematic for young people not to know about them. It’s still part of our history and now that these holidays have become such a massive hype it is important not to forget why they are celebrated.

And do our younger generations actually know why we should remember the 5th November?

I could be wrong but I barely remember the last time I actually heard the day being refered to as Guy Fawkes night. It’s now a chance for people to gather round a massive bonfire and watch fireworks.

The 5th November had massive repercussions for our society. If successful we could have lost an entire Parliament. All of the most important people in the country would have been killed. 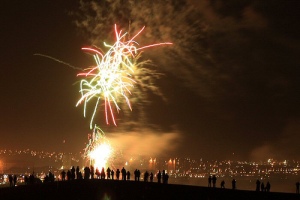 And hence we set off fireworks and a bonfire. To represent the Gunpowder plot at the House of Lords in 1605.

Around the same time of year, Samhain included the burning of an “old guy” on a bonfire which coincidently became personified as Guy Fawkes.

Maybe I am just being a bit pessimistic. Maybe I should embrace our national holidays more?

But in writing this commentary I’m not saying that celebrating national holidays is a bad thing. Anything but. I think they’re a fantastic way to enjoy things, not to mention an excuse for a good old party.

I just think that we need to remember why we are celebrating them. And even though I may be sounding like a bit of a spoil sport it’s still part of our nations culture and history.

These holidays represent important events. Whether they have religious meanings, social repercussions, or simply an ancient tradition which has been kept alive, there is still a necessity to know why they are celebrated.

I am a student at Wesminster University studying a Masters in Broadcast Journalism. I recently graduated from Southampton University after studying Politics and International Relations. I have a strong interest in social issues such as crime,drugs, alcohol, eating disorders. I am also deeply fascinated by terrorism, after the disasters of 9/11, as can be seen in my unergraduate dissertation on anti-terror legislation and human rights.
View all posts by Daisy Bambridge →
This entry was posted in Daisy Bambridge, Personal and tagged Boston Celtics, Celtic F.C., Christmas, Easter, Guy Fawkes Night, Halloween, House of Lords, Samhain. Bookmark the permalink.