Posted on November 9, 2010 by Daisy Bambridge

Overcrowding on trains will get continually worse over the next four years, MP reports have found. When there are too many people on a train, travelling can become unbearable. I recently had a particually busy experience on the train which has made me dissapointed to hear this finding and angers me that little is being done to calm the situation.

Friday night, bonfire night. Lucy and I were on a train to a friend’s house in Clapham; thinking the journey across London on the tube wouldn’t be too unbearable.

We were already fairly late, but it didn’t even cross our minds that we would be travelling at peak commutor time.

It usually takes about 40 minutes to get to Clapham from Northwick Park. Fortunately we’ve been taught how to back track time (!) so with this in mind we were confident that we would have no trouble with gettting there in plenty of time to catch the fireworks.

The whole day had been a little bizarre when it came to transport. For a start, leaving uni I noticed the BBC breaking news about a cement mixer which had fallen onto a train track by Oxshott station.

Chaos: Cement Mixer falls from road onto train in Oxshott

I can potentially go through Oxshott on my way back from London and I know a few people who live in that area, one of my best friends included. Luckily no one I knew was on the train.

I don’t know why, but it sent a bit of a shiver down my spine. I don’t know whether it was becasue it was an area that I had driven many a time before or becasue of the following events.

When I got to Lucy’s room, so we could get ready for the fireworks, we recieved a phone call from Jodi. She had been to meet her boyfriend around Oxford Circus. She was cut off the first time she rang us and sounded a little flustered on the phone.

We eventually got through to her and she explained that Oxford Circus tube station had been evacuated due to a fire alert. We both kind of thought, “yeah right a fire, probably code for bomb.” And I know that sounds cynical but considering it was only days after a bomb was discoverd on a plane in the East Midlands and various other bomb plots nad scares had taken place while notifications to enhance security, it was understandable. Not to mention after Lucy said that one of her friends had said he had a strange feeling something bad was going to happen when they were out the night before.

It was all just a little worrying. And I know it may sound lame but, at the time, when things are going through your mind its hard not to think something bad is going to happen. But you can’t live in fear. It was just a few random events that had happened and there was no point in letting it ruin our night.

Sardines, or should I say sharks?

The journey started off fine. We managed to get a seat even though it was quite busy. And when we had to change at Bakerloo it was horrifyingly busy. It was like a normal commuting busy-ness.

We stood up, which was fine, becasue there were no seats left. Bearing in mind Lucy was carrying a plate full of brownies which she had made the night before for the evening, so if it got busier we knew she may have difficulty.

The extent of occupancy though, we did not predict. I think it was when we went through Westminster that it became worst.

We were seperated by a rabble of people although I was kept entertained by a group of boys in front of me who were laughing at a guy in the carriage behind us who looked like he was stoned.

When Westminster came, it literally felt like we were sardines. I think one of the boys even mooed becasue it reminded him of cattle.

What makes me really angry is that when a tube is clearly rammed, why would anyone bother trying to get on? You can’t be in that much of a hurry to get somewhere so that you have to, not only make your own journey unbearably uncomfortable but you also have to squish everyone else in your proximity into the confined space as well.

It was amusing how my morning journey also started off with a fairly chavy lady who got on the train and asked people to move down when there was clearly no room for anyone to move to. At Westminster, after the doors shut, they resorted to openning again and someone got on.

I couldn’t see but the fact that this man had got on appeared to make things even worse in the carriage as most people moaned about his attempts to catch the tube.

Luckily the next stop was Waterloo, and I thought most people would get out there. Unfortunately they didn’t so I had to squeeze my way out.

At this point I have never felt shorter in my life. I’m not exaclty the tallest girl, which I like, but when trapped surrounded by other people it often makes me feel as though I have somehow shrunk about half the size.

Before I knew it there was some sort of chaos happening in front of the boys. Little did I know it was the man who had pushed his way on at Wesminster.

And if I am using the sardine analogy to describe the carriage this man was definitely the shark. He pushed Lucy and they had a little argument. This triggered other people to also get involved, the boys shouted “Well you shouldnt have pushed your way on!” and there were a lot of “chill out!” comments to be heard.

Lucy grabbed my hand and we eventually got off before the train pulled away.

The chaos didn’t end there. As much as we would have liked it too the Northern line to Clapham was equally as bad. Despite not having an obnoxious little man with us on the train this time it was just as busy and there were delays too so it took twice as long.

Things were evidently made worse by a woman next to us complaining throughout the whole journey. F-ing and blinding at how bad the tubes were.

Lucily we made it. Probably in about twice the amount of time it should have taken but we got there. Alive and unscathed. 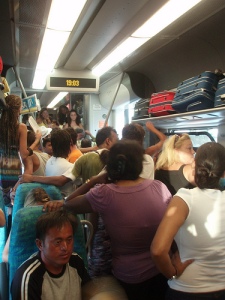 This is just one example of a horrific tube journey. Every day commutors have to put up with this extent of overcrowding, and now we’re being told that it will continue to get worse over the next four years.

I think the worst is being stuck in the tube underground when it is so busy. Its bad enough on an overground train when you can get a seat but at least then you can sit on the floor. On the tube your trapped in the tunnels; theres very little escape. I wonder how there aren’t more people who have panic attacks or collapse. In the summer there was the added problem of the heat which made travelling stuffy and unbearable, in addition to the stench most passengers were giving off. I think they underestimated the amount they would sweat in the tunnels!

It has been reported that over the past 10 years there has been a 40% increase in passengers and this is expected to double over the next few decades aparently despite the nine billion pound attempt by the Department of Transport to improve railways.

And the price of tickets is now astronomical. Transport operators seem to think that if they increase the prices by a small amound every now and again we won’t notice. But we do. I used to be able to get the bus home for one pound eighty, now I have to pay three pound fifty for a single trip that takes just twenty minutes across Guildford.

I just don’t understand where the money is going. Its clearly not going on pay, else the workers wouldn’t be constantly moaning and going on strike and it’s evidently not going on improving the space.

It’s ironic that I thought trains should have some sort of system that would identify the amount of passengers on a train and then use some sort of lock down mechanism to stop people coming on when the carriage reached its limit, something like a lift, when The Public Accounts Committee has recommended that the DfT introduce an automatic passenger counting device to show how many people are travelling  and when and a smart card system on tickets to help reduce inefficiencies of overcrowding in peak times and underused trains at other times.

Transort Secretary Phillip Hammond says “we currently have the most expensive railways in the world.”

Quite frankly, its not good enough, and if I’m paying more than other countries I am expecting something amazing, which at the moment, is not the case.

I am a student at Wesminster University studying a Masters in Broadcast Journalism. I recently graduated from Southampton University after studying Politics and International Relations. I have a strong interest in social issues such as crime,drugs, alcohol, eating disorders. I am also deeply fascinated by terrorism, after the disasters of 9/11, as can be seen in my unergraduate dissertation on anti-terror legislation and human rights.
View all posts by Daisy Bambridge →
This entry was posted in Daisy Bambridge and tagged Phillip Hammond. Bookmark the permalink.